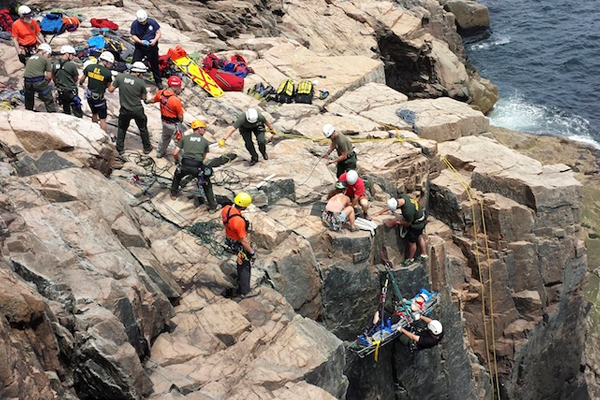 Inquest into the deaths of Gabriel Conor Runge and Andre Daniel Vogel who died on State Highway 5 near Settler’s Road, Bay of Plenty, NZ on 28 November 2014. This inquest raises important issues about fatigue and drowsiness in driving a motor vehicle.

The Court makes the following comments and observations pursuant to section 57(3) of the Coroners Act 2006:

(a) Organisations and drivers in general need to look at their driving protocols to see whether they are sufficient in terms of fatigue and/or drowsiness.
(b) There is a need for extreme care and vigilance when there is a physical activity such as hiking reasonable distances for several days prior to a road trip, and proper procedures are in place to ensure the driver(s) are properly monitored.

Peter Corcoran, Director Maritime Safety, explained that the inquiry was conducted because of the apparent lack of appreciation of the risks associated with a school activity involving kayaks operating in ocean waters in winter.

“The people involved in this incident were lucky, the only things lost were four double kayaks and eight paddles but it could have been much worse…

“…Maritime Safety investigators found a lack of understanding of the:

Teachers 'Not Watching' When Student Drowned

Teachers ‘Not Watching’ When Student Drowned

News Story (ABC News. May 8, 2012)
A Tasmanian coroner has found a Latrobe High School student was not being supervised by teachers when he drowned on a school excursion. Coroner Rod Chandler has handed down his findings in the death of Rene Levi, 15, who drowned during a swimming trip to Bells Parade at Latrobe in 2009. Coroners Report (Tasmanian school boy drowning

News Story (Herald Sun. May 9, 2012)
A report criticising aviation regulators following a2010  skydiving plane crash in New Zealand that killed nine people, including two Australians, says there are lessons to be learned by all adventure tourism operators.

There have been 8 deaths since 1999 associated with commercial white water rafting. There
were 3 deaths before 2007, as follows:

All the deaths were due to entrapment and drowning.

On 10 December 2006, a few days after school broke up for the final time that year, a
group of three teenage boys set out on a bushwalk in the Blue Mountains National
Park. Those three boys, Kostas Brooks, Philip Chan and David Iredale, were students
of Sydney Grammar School. This inquest concerns the tragic death of David Iredale,
who became separated from his companions on 11 December 2006 and was last
seen around midday on that date.

On 11 April 2001, Dale Measey fell about 10 metres to the ground on to his head when he
was preparing to ride upside down on a giant swing-type activity called “The Rip Swing”.